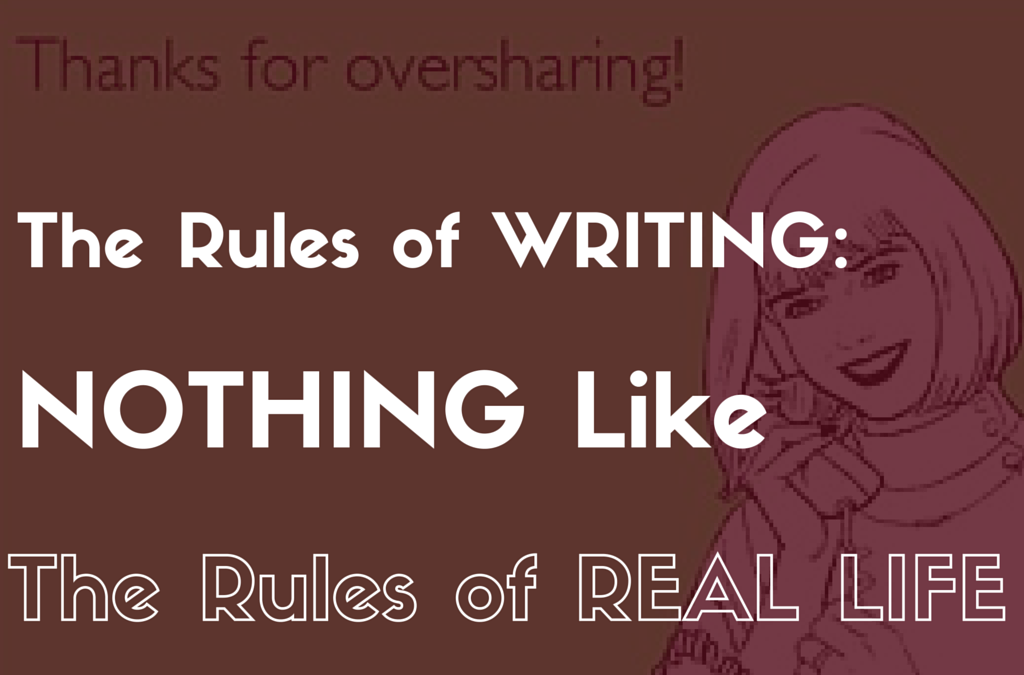 In real life, we censor ourselves, leave out the gory or embarrassing or overly personal details of the stories we tell about our daily lives.

In writing, we have to be so brutally honest about the human emotional reality of the situations we portray, we are left feeling exposed–if we have done our job right.

Good writing is–unlike all of the people with which we are surrounded (and even ourselves, if we dared be totally truthful about it– honest to the point of purity.

Perhaps, this is why those of us who love to read have such a deep connection to it: its honesty is such a relief, so compelling, such a breath of fresh air, that we miss the characters-turned-friends once we’ve come to the end of a good yarn.

Good writing is that guy you invariably end up sitting next to on the plane who wants to tell you every detailed encounter with the junior high bully or every hobby his grandkids ever pursued…except when it’s good writing, it’s actually interesting. The story is compelling even though you’re not male or have never crossed paths with your school’s bully, or have no kids nevermind grandkids. It has an emotional reality to it so convincing that not only do you believe it, you feel it–and you want more.

This is what good storytellers do. Yet doing so is surprisingly difficult, which is perhaps why Hemingway compared writing to sitting in front of a typewriter and bleeding. If we’re doing it right, the rawness of our humanity bleeds out onto the paper.

The process to create writing that is true to the human experience is akin to the Velveteen Rabbit’s process of becoming real. “Does it hurt?” the rabbit asks in Williams’ children’s story.

Where writing is concerned, yes, it hurts. It hurts because it is difficult to draw on those emotional reserves, to extract the essence of the most challenging moments we have lived through, and because honesty–especially with ourselves–can be unnerving even in small doses.

When we write, we are given permission to break free from the mold of societal expectations about oversharing. In fact, our stories fall flat due to undersharing.

And like the Velveteen Rabbit’s becoming real, learning to share at this level, to reach those depths of honesty with ourselves and our readers, and finding the voice to express it, all take time.

It doesn’t happen all at once,’ said the Skin Horse. ‘You become. It takes a long time. That’s why it doesn’t happen often to people who break easily, or have sharp edges, or who have to be carefully kept. Generally, by the time you are Real, most of your hair has been loved off, and your eyes drop out and you get loose in the joints and very shabby. But these things don’t matter at all, because once you are Real you can’t be ugly, except to people who don’t understand. (Williams)

The same could be said, I would argue, for the creation of good writers.

Writers must be real–first with themselves and, in turn, with their audiences. We must be willing to be the oversharer on the plane to the point of hyperbole, to tell not only the story, but to reveal its deepest emotional and psychological underpinnings. This catharsis requires a lot of mining. (The process may also be why Hemingway suggested writing while intoxicated, but that’s a different topic for another day.)

So, go ahead: put yourself out there. Be “that guy” on the train. Be the grandma with the wallet-sized photos of her plethora of grandchildren. But tell it real. Tell it raw. Be, as a writer, the person polite society rejects in walnut-panelled parlors for saying what was best left unsaid.

Oversharing is the burden of being a good writer, but it is, too, its simultaneous freedom.