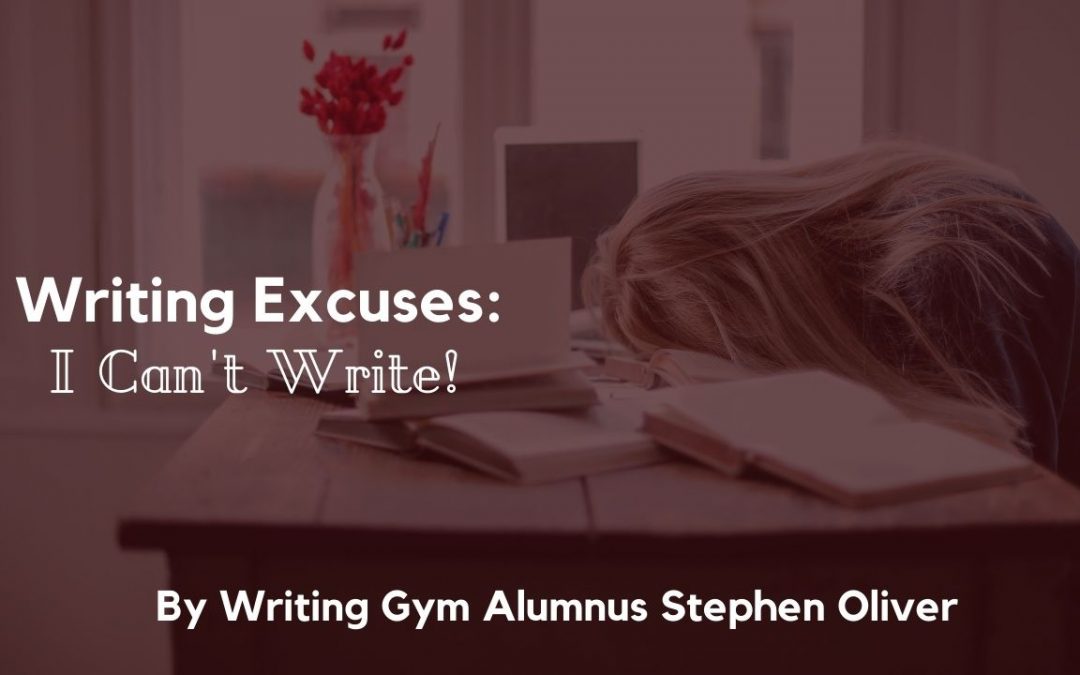 “I can’t write because…”

I have heard this, seen this, read this, more times than I care to remember. Especially in the last year, since I became active in several FaceBook writing groups.

Sorry, people, but that isn’t a reason for not writing, it’s an excuse. And a feeble one at that.

Recently, I stood in the cottage where Samuel Taylor Coleridge lived for three years with his wife and family. It was by far the worst house in the village. The rooms were small, and the only heating came from a small fire in one room. At the time he moved in, the thatched roof was leaking, mice were running riot, and he had no money. Moreover, there were often other people visiting: the Wordsworths, Poole, and so on.

While there, he penned some of the greatest lyrical ballad poems of the age: “The Rime of the Ancient Mariner” and “Kubla Khan” to mention but two.

He wrote despite the frankly appalling conditions in his home. Cold so bad, for instance, that his son Hartley would cry at night, forcing Coleridge to bring him downstairs to his writing room because it had a fireplace. The mice I have already mentioned. And how they accommodated their visitors, I shudder to think.

“In Xanadu did Kubla Khan / A stately pleasure dome decree…”

If he could write that in these terrible conditions, then you, sitting in front of your computer in a warm, comfortable home or an air-conditioned office, have no excuse at all.

So, get off your backsides, or on them, as the case may be, and start writing. Even if you can’t create something as wonderful and ethereal as Coleridge did, it will still be far better than the nothing you are producing right now while whining at me.

Cure: Write Something, Anything

I’ve said it before, and I’ll say it again, the cure for writer’s block is to write.

You don’t have to write your novel, short story, memoir, or whatever it is that’s causing you a problem. That will come later.

But you have to write something.

It could even be about the frustration of not being able to write anything, if nothing else. We want to get our fingers moving on the keyboard, the pen scribbling on paper, and our thoughts out into the world in black and white. After all, if it’s garbage, we can always throw it away or delete it. But we have to get the energies moving.

The Muse does not appear if we don’t invite her by writing.

It’s okay if you don’t reach your daily writing goal, either. I’ve had days where the only words I wrote were submission queries while reformatting the manuscript once again for yet another agency or publisher. I’ve spoken about it in another post (Submissions). At other times, I’ve been revising and editing a manuscript to get it into shape for submission in the first place. On these days, I’m lucky if I get a dozen words added to the manuscripts, although I may have altered hundreds.

So what? It’s all part of the process. If you want to become a published author and do this professionally, then you have to be professional about it.

I write only when inspiration strikes. Fortunately, it strikes every morning at nine o’clock sharp. – Somerset Maugham

Personally, the quantity (and quality) of my writing improved once I joined the Writing Gym. Since joining, I have written hundreds of thousands of words, most of which I intend to publish some day.

It all began after I had written an anthology of short stories but didn’t know what to do with it. And I was stuck on a novel.

Yeah, I had writer’s block!

I first heard of the Gym when Annalisa Parent’s publisher was looking for advanced readers of her book Storytelling for Pantsers: How to Write and Revise Your Novel Without an Outline. I received an ARC (Advanced Reader Copy) and soon realised that I had found someone who understood the way I write.

You have to understand that I’m a pantser (or Discovery Writer) through and through, writing as the Muse dictates, with little knowledge of where she is taking me. Here was someone who not only knew about it but also had advice on how to proceed once I was done.

I asked her if she also would also help me edit my work and, before I knew it, I was a member of the Writing Gym. I discovered that Annalisa offers a number of programs to help aspiring writers complete their books and get them published.

We worked on the anthology, editing it and bringing it up to a publishable standard. In the meantime, she also encouraged me to continue with the short stories, resulting in another three completed anthologies, and three more anthology WIPs (Works In Progress for those who don’t like acronyms) that are offshoots of the original four. I’ve also written two versions of a novel and begun another. In addition, the blocked novel is now halfway completed (it’s going to be an epic).

The first book of the anthology was rejected by various agents and publishers on the grounds that anthologies are seldom good break-out works to start a publishing career with. Annalisa and I sat together at last year’s Writers’ Retreat and discussed the problem. We decided to take two short stories I had written and to use them as the basis of an episodic science fiction novel.

Over the next couple of months (Annalisa offers a course to help you complete your novel in eight weeks), I wrote the remaining chapters and was ready for editing.

During the editing phase, Annalisa read the book and made suggestions to improve the story while encouraging me to develop my voice. Since this was the second time around for me, editing went much better. I had learnt so much about the writing process working with Annalisa on the anthology that there were few corrections necessary. Most of our work was developmental editing, finding and correcting plot holes, foreshadowing, linking back to earlier events, improving dialogs, etc.

She also helped with my abiding sin: Britishisms, as she calls them. I tend to use words and phrases that are unique to British English, which could limit American sales.

Perhaps the answer for you might be the same as mine; talk to someone.

It’s easy enough to book a call with Annalisa. It will last about 45 minutes to an hour. You can discuss your problems with her. She might be able to help you, or at least, point you in the right direction.

And if you are invited to join the Writing Gym, who knows? We might meet one day at one of the Gym’s online get-togethers.

Or even at a book signing.

Writing Gym member Stephen Oliver wrote this piece while on the Writing Gym in England retreat. You can learn more about him here.