What are Literary Agents REALLY Looking For?

Welcome back writers and muse daters. Today’s Writing Gym Podcast guest is Jeff Kleinmann from Folio Literary Management. He shared with us what it’s like to really be an agent and some of the things that really happen behind those closed doors. But before that, we asked Jeff how and why he became a literary agent.

“Oh, it’s a huge mistake,” Jeff joked. “My career is not normal. I’m actually practicing intellectual property law and I happened to share offices with a literary agency. I would read manuscripts for the agency and the first one I read ended up being sold for $100,000 and then I did a seven-figure deal with the author soon after. I worked with them back and forth but received no credit and I thought that maybe I should seriously consider pursuing this path. And that’s where I am today. ” 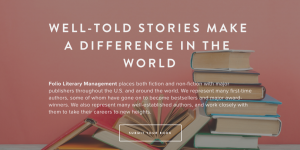 Jeff doesn’t believe that there are any low moments in his work. Just recently, a book he worked on was on the best-seller list for a while, a memoir had received a deal to make a series with Netflix, and so on. Such great accomplishments and no wonder that literary agents are as respected as the author.

However, there’s this myth out there that agents are these stuffy people who seem to enjoy rejecting authors and their manuscripts. I know that’s not true. So, what’s it really like to be an agent?

“So, we own the Herald Ober Associates, which is one of the longest and oldest agencies in the country. It was established in 1929 and they represented William Faulkner, Agatha Christie, Langston Hughes and so on. Back then, anytime the phone rang, agents would say the standard: Thank you for calling. We are not accepting any new submissions. There is some sort of feeling that all this agency wants to do it to stay away from writers–which was kind of cool. But I think most agents aren’t at all in that world,” Jeff explained.

One of the problems that Jeff finds in many writers is that they submit their manuscript that just aren’t ready. “We see a lot of unsolicited stuff that isn’t ready to go. And because of that, we get to be protective of our time. To prevent us from slogging through 20 manuscripts that aren’t ready yet, a lot of us would put up barriers. We want to make sure that the writer is ready to go–and the only way to make sure of that is if they have gone through the right channels to get their manuscript ready.”

I asked Jeff what he is seeing in the publishing industry and he shared an important distinction between traditional publishing and self-publishing.

“The split between those two really is the voice,” Jeff stated. “It’s the ability of the writer to be distinctive in the way they write. If you have distinctiveness, then it seems like you’re going down the trade route–the traditional publishing route. If you are maybe less distinctive, your book might be more commercial. It’s going to be more focused on plot rather than the writing itself. These books tend to be self-published, or non-traditionally published.”

Indeed, not everyone has to go through the traditional route. Some people may realize that self-publishing makes more sense to them than going to a big traditional publishing house.

As a literary agent, Jeff certainly receives a lot of manuscripts and other submission materials. What kind of elements in a submission makes him feel excited?

“There are three elements that I look for. The first, and most important, is the writing. Every word in the query should sound mastered, should feel smooth and distinctive. Authentic. The second is premise. What is it about the book that would make me want to pick it up and read it? The third is credentials. Is the author speaking regularly? Are they a part of a literary community? Do they have an MFA (Master of Fine Arts) from a prestigious program? These are things that make me think they are serious writers.”

What about things that don’t impress agents like him?

“I used to read query letters with my daughter,” Jeff started. “When she was just four years old, I would read these letters to her like a bedtime story. When the letter is boring, she’d ask me to go to the next one. And, you know, having a four-year old judge a query letter is really useful. If I’m not interested or enthusiastic about it, then I just go to the next one.”

It’s definitely important for a writer to catch the attention of an agent with their query letter. If they don’t feel interested, they will go through them quickly and find other things to do. I always tell my writers that they have 30 seconds maximum to impress an agent.

“Things like misplaced apostrophes,” Jeff continued, “passive voice, try-hard language, clumsiness of language–all these sorts of things end it for me. Before submitting query materials, authors proofread their submissions.”

It may seem unfair–a misused comma having the final say in the agent’s interest on your manuscript–but it “says to me that the author didn’t proofread their submission well enough,” Jeff finished.

It’s one of these things that make agents seem very unapproachable, but I asked Jeff what it was he wished that writers knew about agents.

“We almost see ourselves as the front-liners. Before your book gets to the publishing house, we really try to get the book in its strongest shape. But sometimes we deal with authors who want to do their own thing. In reality, we want an author who would listen to us. And so, the question is: do you actually really want to hear somebody else’s opinion and are you actually really going to make the changes?”

Jeff was working with a writer whose book he loved so much he read it twice. But he noticed that the writer seemed to be writing two completely different books.

“I told him that he has to change the last part to fit the first part, or the other way around. The first part was just wonderful, but it didn’t fit the second part. He didn’t want to change anything. Maybe the second half of the book is the book he really wanted to write. But in order for the whole book to make sense, both parts have to make sense first.”

What about for unpublished writers–what kind of thing should they know before sending anything to an agent? In my line of work I see many aspiring writers send in materials that are half-cooked, not yet ready. And thank goodness, they come to me for help because I help them cook it. Jeff agreed.

“I would encourage aspiring writers to have other people read their book. I would really make sure, from page one, that everything is clear–that there is something at stake and that the action is absolutely driving the story on the character’s desires.”

Finally, I asked Jeff one tip he would give to aspiring authors.

“Ask somebody you trust, someone who reads a lot, to read your book. If your mom is a very gifted reader, ask her. Have them cut any words from the page they feel is unnecessary and pay them money. Real money. It is scary, but if you don’t want to pay up you have to make sure that your book is really tight, that it has narrative movement, before you have a different pair of eyes look at it.”

Thank you for your time Jeff.